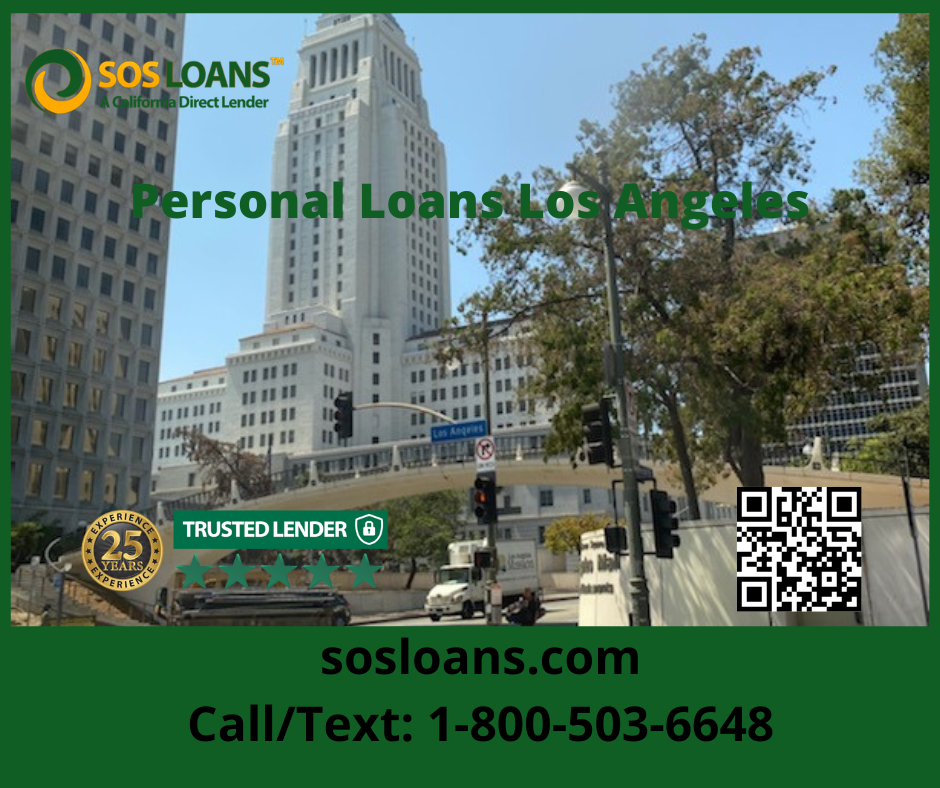 Many borrowers in Los Angeles County have been using S.O.S. Loans for their personal loan provider for the past 25 years.  S.O.S. Personal Loans are unsecured which means you will not need to own a car or home to qualify. Also, there are no fee(s) on any loan that you would get with SOS Loans. So the amount you borrow is the amount that you will be funded. So if you live or work in Los Angeles the easiest way to get an SOS Personal Loan is to navigate to our online application on your phone or PC and you could have $5,000 to $50,000 within a day.

LOOKING FOR A QUICK LOAN IN LOS ANGELES

S.O.S. Loans provides online personal loans for working professionals & executives in Los Angeles, California. S.O.S. Loans, Inc. has been a California direct lender for over 25 years, licensed and bonded through the Department of Financial Innovation & Protection. To date, S.O.S. Loans has maintained a 4.5 Star Rating through Google reviews. "A study by the Spiegel Research Center determined that ratings of 4.2 - 4.5 are the most trusted".

Do you work or reside in Los Angeles? Looking for a personal loan of $5,000 to $50,000 requiring no collateral? Then S.O.S. Loans is your local loan agency servicing Los Angeles County. With over 25 years as a trusted lender headquartered in Los Angeles, CA right next to SOFI Stadium. Our simple and secure online loan application can be completed in less than 5 minutes from your smart phone. Funds are wired to your bank account usually the same banking day. You can submit an application at: https://sosloans.com/application & you will receive a response back via text or email within 15 minutes.

To be considered for a personal loan with S.O.S. Loans in Los Angeles you must meet the following requirements:
Minimum Gross Monthly Income: $6,500 per month
Minimum Credit Score: 535+ (Experian)
Employment: W-2 Income from the same employer for 2 years +
Established personal bank account for a minimum of 2 years +

As your local loan agency offering personal loans in the LA area many of our customers live, work or just pass through cities like:

CLICK HERE:  Learn More about personal loans near me

Working for a top employer in Los Angeles can help your personal loan approval.

If you happen to work for any of the following top employers of Los Angeles. Then S.O.S. Loans has a special loan approval process for your application. See if your employer made the list(s).

Having a banking relationship with a top bank or credit union in Los Angeles can help your personal loan approval.

A simple google search on your mobile phone will result in a listing of the most popular banks in Los Angeles. Lender's like S.O.S. Loans are more likely to approve personal loan applicants that have banking relationship with a major bank in the Los Angeles area. So, if you bank with any of the following financial institutions, you can be confident that your loan approval has become that much easier.

Bank of the West

What can a personal loan be used for?

A personal loan can be used for almost anything you need.  You can use the loan proceeds to make a major purchase, home improvement, car repair, travel, bucket list item or just help with your personal cash flow.  Being, there is lots to do in Los Angeles that requires some extra funds.  You can purchase some tickets to take your family to a sporting event.  Los Angeles has the best professional and college sports around.  Watch the Dodgers, Lakers, Rams, USC Trojans and UCLA Bruins play at their local venues.  We compiled a list of some of the coolest things to do in Los Angeles: